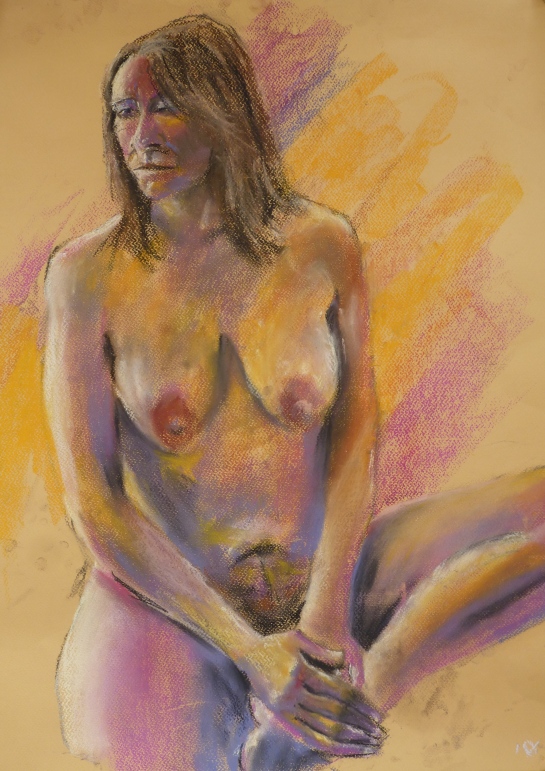 At the moment I am struggling over bigger versions of the acrylics I showed earlier: Dancing Away the Blues and Music in the Making, so I have little to show. Today I went to the life session and did this in pastels. The model folded her leg underneath her and clasped her foot in her hands. It proved a difficult pose to hold and there were many cuts for her to regain the circulation in her leg. Then the fire alarm to the building to the sounded and we had to evacuate. So the three hour session was severely truncated, even after the half hour tea break.

Other figurative work can be found on my website grahammcquadefineart.com

It was a sunny spring evening in Ambleside near Lake Windermere in the English Lake District. I was facing into the evening sun and I painted undisturbed for about an hour. I have done two paintings subsequently, this being the second. I thought I could do with a break from the acrylics, I have been dong recently.

The other Ambleside painting is on my Website amongst the sold paintings: grahammcquadefineart.com

Just playing around with square brushes and some collage. The collage hasn’t worked very well, but I am pleased with the square brushes which bring a dynamic quality to the work. I put some undercoat on an old watercolour painting. It had a blue hue and I worked with a restricted pallet.

Other figurative work is available on my website: grahammcquadefineart.com 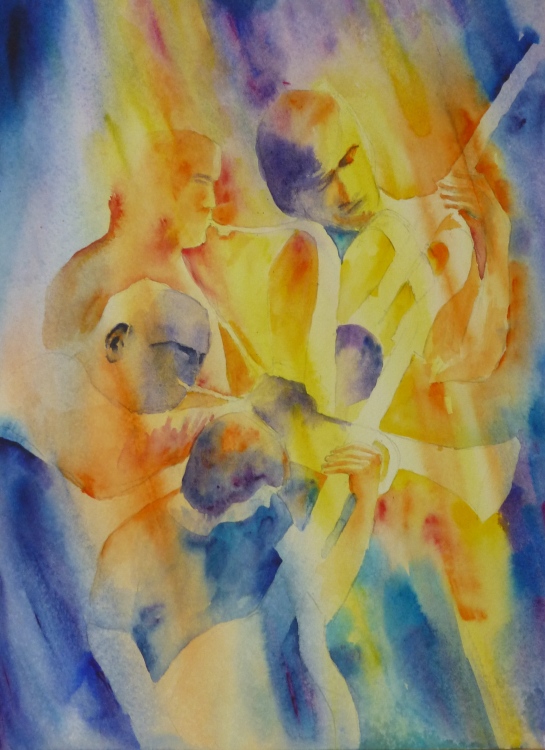 I wanted to create a series of paintings following the earlier image I posted on March 3rd – Dancing Away the Blues. This is the second in the series. I think this one is getting to a stage I am comfortable with. There are a couple of earlier tries below. The first one had a rather cumbersome grouping. I felt the players could be grouped better. On the second I got a better grouping but found the painting too pedantic and a little heavy. I also felt I had lost the pleasing ambiguity of Dancing Away the Blues. I had started to put more and more detail in and felt I had overdone it. Even on the painting above there is some more detail, but I have been able to stem my nit picking. There will be a few more changes when I do the final edition, but I think I’m getting there. 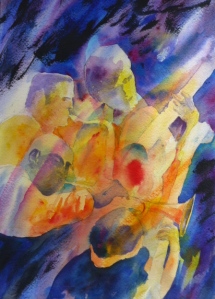 A change of pace and medium. I get given small trunks of trees and the sizes rather restrict the possibilities, but I was pleased with the outcome of this one. Carving through the outer wood and into the heartwood gives some interesting tonal changes. The strip of wood has the feeling of fabric in freefall.

Other sculptures and ceramics are on my website grahammcquadefineart.com

Still plugging away at these. I thought that a wet night might give me some interesting reflections, but you can only try. The idea seemed  good at the point of inception, then comes the cold light of completion.

Just playing around in a life drawing group, applying the paint fairly roughly at the base and getting tighter as I moved up, but even the face is rougher than I would normally do, yet I like the ruggedness of it. It might be something I could develop further.

I am about to do a watercolour demonstration and this was the subject I was going to paint – or something like this at least. On my last post someone said they were interested in the steps of the work I showed so as I photographed each stage for my own planning purposes I thought that I could post them for anyone who is interested.

The first stage was do a drawing and cover the stamens with masking fluid. I then mixed up my colours, lemon yellow, cadmium yellow, a green mixed from Prussian blue and cadmium yellow, Prussian blue and purple made up from ultramarine blue and alizarin crimson. These were relatively strong mixes. I then wet the entire paper and added the colours, trying not to blend them completely and, see the image below.

I then started painting the inside of the flowers to further define the heads and also some paint was added to create some form on the outside of the petals. Again the same colours were used, adding water from a clean brush to feather the colour in. See below:

I then removed the masking fluid from the stamens and added some colour to them. I then cut out the leaves using darker versions of the same colours, washing them away with a wet brush to get some lost edges:

Finally I added an extra leaf between the two groups of leaves by further darkening the background. I then added some glazes of lemon yellow and purple over the flowers and the purple over the leaves to give the final image.

There are other floral images done by this approach on my website grahammcquadefineart.com

I had a notion to paint some interlocking patterns of  colour using the human form as key . I wanted to balance on the edge of the figurative and abstract and let the interaction of colour be the main driver of the piece. I had some images of dancers and thought that this would be a good subject to use and then I thought of the title Dancing away the blues which then gave me direction for the hues and distribution of the colours.

I firstly did a watercolour sketch just to try out the colours and their distribution.

It also gave me an idea of the placement of the figures. I then had another go but this time with acrylic paint using both liquid and heavy bodied acrylics. I wanted to use acrylics to get the vibrancy of colour that they can give. I started with the liquid acrylics, washing them in and allowing them to mix like watercolours. I liked the effect and then I started to cut out forms with heavy bodied acrylics. This gave me the following sketch

I thought that the heavy bodied acrylics killed the dynamism of the liquid acrylics, so I had a second go but this time only used liquid acrylics, using subsequent washes to cut out the figures which resulted in the image at the top of the page.

Having only a limited number of liquid colours I did employ some heavy bodied colours but diluted them down and tried to get them mobile. I think it is coming along and I might get some more liquid acrylic colours to start a bigger version.

Other acrylic and watercolour paintings are on my website:  grahammcquadefineart.com