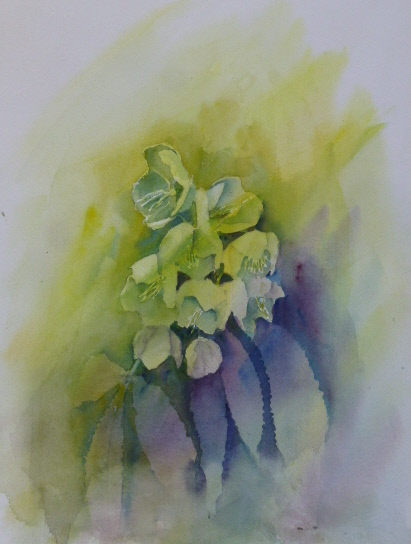 I am about to do a watercolour demonstration and this was the subject I was going to paint – or something like this at least. On my last post someone said they were interested in the steps of the work I showed so as I photographed each stage for my own planning purposes I thought that I could post them for anyone who is interested.

The first stage was do a drawing and cover the stamens with masking fluid. I then mixed up my colours, lemon yellow, cadmium yellow, a green mixed from Prussian blue and cadmium yellow, Prussian blue and purple made up from ultramarine blue and alizarin crimson. These were relatively strong mixes. I then wet the entire paper and added the colours, trying not to blend them completely and, see the image below. 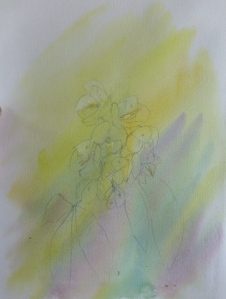 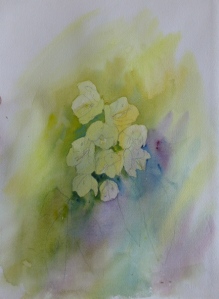 I then started painting the inside of the flowers to further define the heads and also some paint was added to create some form on the outside of the petals. Again the same colours were used, adding water from a clean brush to feather the colour in. See below: 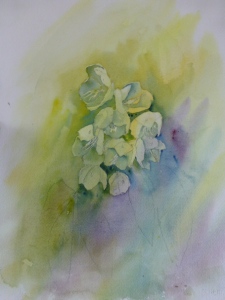 I then removed the masking fluid from the stamens and added some colour to them. I then cut out the leaves using darker versions of the same colours, washing them away with a wet brush to get some lost edges:

Finally I added an extra leaf between the two groups of leaves by further darkening the background. I then added some glazes of lemon yellow and purple over the flowers and the purple over the leaves to give the final image.

There are other floral images done by this approach on my website grahammcquadefineart.com

This site uses Akismet to reduce spam. Learn how your comment data is processed.