I wanted to try another single colour painting and thought that yellow might be worth a go. I wasn’t happy with the outcome as the tonal range was too shallow. Plan B was to mix a blue with one of the yellows. I selected winsor lemon and added varying amounts of French ultramarine. The ultramarine allowed me to get a bigger tonal range and hopefully a sense of calm and light I was after.

At the end I glazed the whole painting, except for the sun area, with winsor lemon. Not sure about the effect as it softened some of the features, but once done there’s no going back. 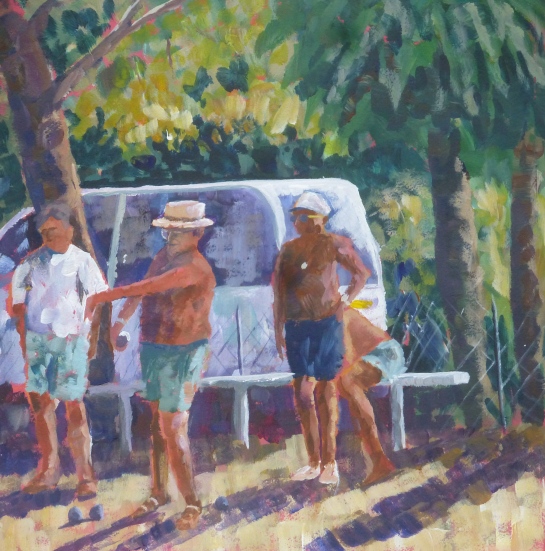 I was asked to do a demo for a local art club. I did one there last year in watercolour, using a floral painting to explore ways of loosening up. It’s certainly something I could do more of myself and last year I looked at ways of loosening up in acrylics using square brushes. I have posted a number of paintings using this style. Here are a couple below.

Having run an art club myself I always hated demonstrators who hadnt planned their presentation and ended up not completing the piece – mainly because they waffled on too much at the beginning. So I thought I’d try the piece out and see how long it took. So here it is. I have posted the same subject before, but it had too many people in and I thought that this demo would give me an opportunity to explore a tighter composition, with fewer people. So  you might be seeing something similar in the future as a more finished piece.

I had an image of a lake but I wanted to add something in the foreground which would complement the mood. A fellow blogger Richard Baker on wordpress.bakercake35.com had some great shots of Wastwater and there was one with some rocks in the water. I realised  that I could use a similar motif. With some rocks leading the eye into the water, they could also echo the shapes of the hillside and I could maintain the colour balance.

I was pleased with the simplicity of the piece.

Other landscapes are available for sale on my website: grahammcquadefineart.com

Since Christmas I haven’t done any life drawing. I felt I was getting into a rut and repeating myself and I needed some time to think where I could go with it. I do think it is a great discipline and will return shortly. However the other day I needed to talk to someone about an upcoming demonstration I have to do and she helps run a life group nearby in Formby. So it was an ideal opportunity to have a quick dabble. The trouble with the group is you never know what format the session is going to take so you cant plan much in advance. After a couple of quick poses they settled the model down for a longer pose for just over an hour – long enough to get my pastels out. The model had red hair and I liked the way she seemed to rise out of the red/brown drapery.

Other life drawings are on my website mainly under the pastels and acrylic sections: grahammcquadefineart.com

I went to get some anti malaria tablets for an upcoming trip and was cycling back home along Shakespeare Street in Southport and was taken with the light bouncing off the cars and roofs. I stopped and took a few photos. The predominance of muted colours in the scene allowed me to  add dashes of stronger colour which seem to gain added dynamism by the surroundings.

The street is full of independent traders and at the far end on the right hand side past the red van is a lawnmower museum. It has got a bit of national recognition as a quirky enterprise  with many celebrities donating their old machines. I could say that this kind of thing is a characteristic of us British, but fairly recently  I was in France, in a small hamlet on the Canal du Midi, and at the end of the village was a hat museum. So I suppose this kind of madness goes on everywhere. Where ever someone has a rare passion for their interests.

More townscapes and paintings of Southport are available on my website: grahammcquadefineart.com 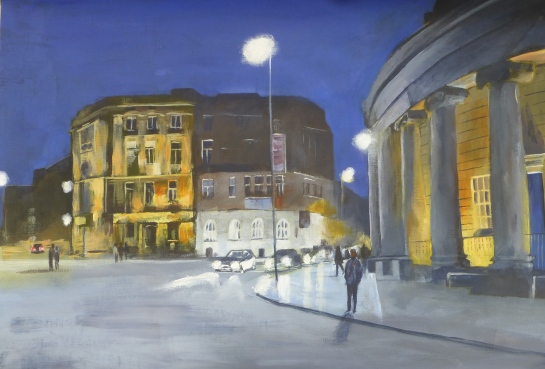 The other Saturday evening I walked up to the top of Mount Pleasant in Liverpool which is just by the Catholic Cathedral and the Everyman Theatre. Standing, looking up to the University and its buildings on the left I was struck by the complementary colours in bands even down to the blue door of the Liverpool Medical Institute on the right. The deep blue of the early evening sky also added to this. I thought it was worth painting, even though I couldn’t really make out the forms in the university buildings. Still, it was the colour shifts I was after, not the architecture.

Other Liverpool paintings are available on my website: grahammcquadefineart.com 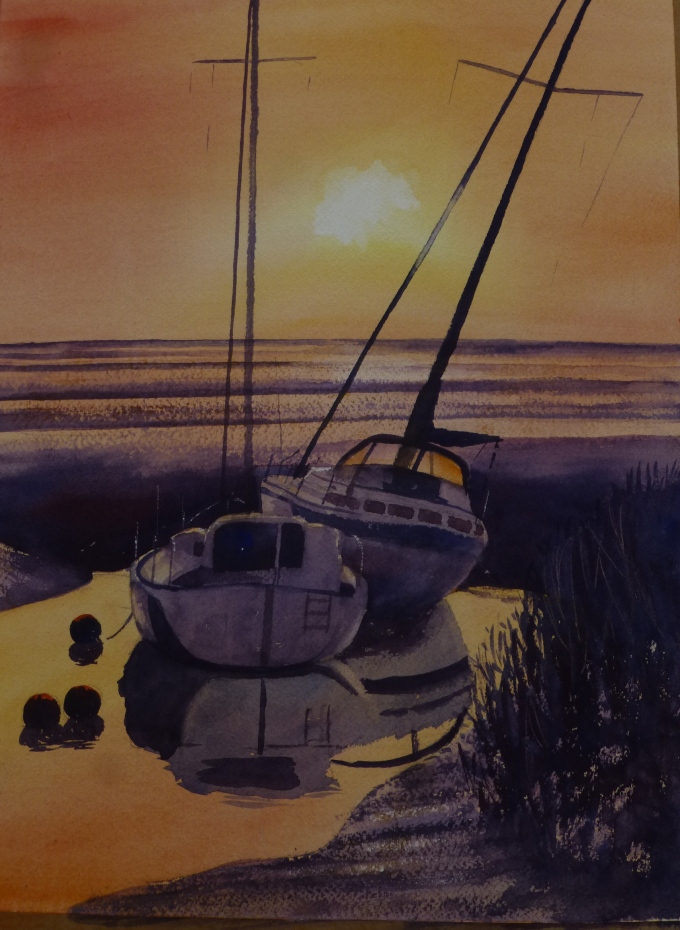 Last September I went out painting on one of the few bright evenings we had in late summer/autumn. I sat myself down near some old farm buildings surrounded by trees and started to draw and then paint. I hadn’t counted on the sun disappearing behind the trees so quickly ( very different to when I was out in June). The interesting assortment of buildings in light and shade quickly merged into a dark mass in deep shadow. So I packed up and,  as the sun was still hovering over the horizon, decided to call in to the Mersey estuary where the local river, the Alt, merges into it. There are a many boats moored right  along the estuary, all  the way out to the Mersey. When I got there the tide was out and  the sun cast everything in an orange glow. The river carves its way through the mudflats to the Mersey and the sun created intriguing patterns on the mud, reflecting off the wet mud and being absorbed by the drier areas. The scene was changing too fast to paint so I took a load of photos and painted it later on a half imperial sheet. I wasn’t happy with the result and had another go on a  smaller quarter imperial sheet. I am happier with this. There isn’t much to the scene and probably too many darks, but I think I’ve got the feeling of the place as the sun disappears over the Atlantic.

Other marine paintings are available  for sale on my website: grahammcquadefineart.com

I did a small version of this as a card for a friend who isn’t very well. It came out surprisingly well. I had been reticent about tackling phlox as I found them rather fussy and the red/green colour scheme wasn’t my favourite. After the card I thought I might as well give it a go on a quarter-imperial sheet (around 26x36cm) and here it is.

I feel the card was better and the scaling up does make it feel a bit contrived and fussy. Still you’ve got to try these things. On the smaller version I was looser and here I got things a bit staid and detailed, although I just about managed to let go at the bottom. Maybe I might have another go later.

Other florals are available for sale on my website: grahammcquadefineart.com

Normally I am in Liverpool early on a Saturday, but as my daughter came up for a few days to stay we went into the city for an early evening meal and before I met up with them I wandered around with my camera. Fortunately it rained and the reflections on the wet pavements really added to the atmosphere. I really liked the youths hanging around the newsagent and the reflected light coming past their bodies. I hear its going to be a wet Saturday tomorrow, so I might get back down, but in any case there may be a few more shots in the camera.

Other city  paintings are available on my website grahammcquadefineart.com 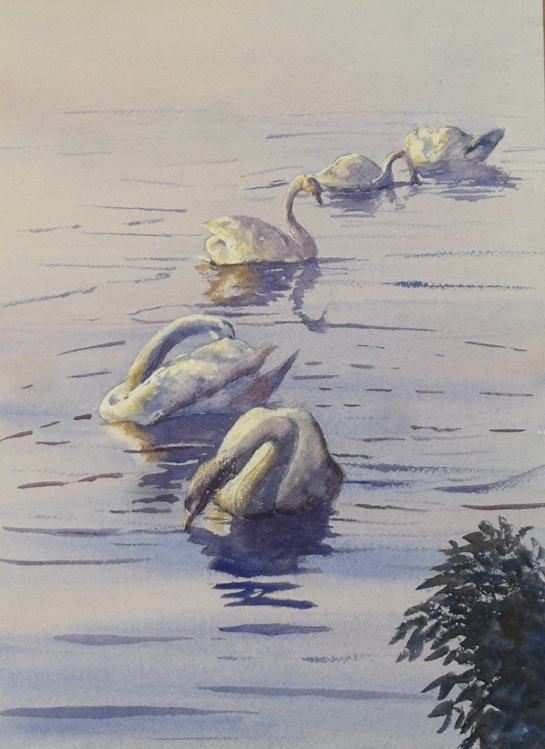 I had a collection of photos I took of swans on the Thames in the summer and decided to arrange  them in a less haphazard grouping. I liked the way the evening sun highlighted the edges of the plumage.