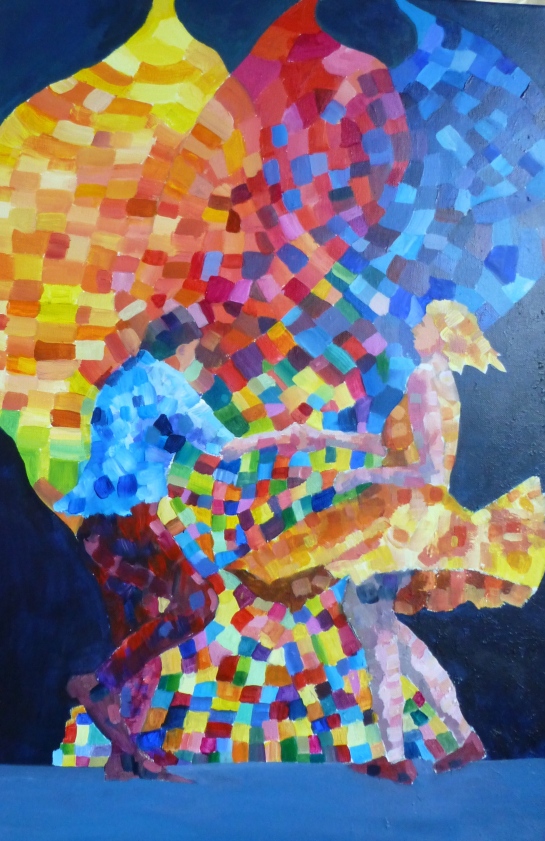 I saw some work on a blog by an Israeli artist painting faces in blocks of colour which was very striking and this got me thinking. I didn’t want to paint a portrait and  I wanted some sense to the background so I came up with this. There is a bit more I might do to improve it,  this but essentially it’s done . The work I saw used bigger blocks of colour – something I wished I had done as I got into this, although I did want to have the patches smaller and more diverse towards the bottom. Mixing diverse colours from just six base colours and white you begin to get a little stir crazy after a while.

Other paintings available for sale are on my website: grahammcquadefineart.com

This is the third of three full sized paintings (76x50cm) I have just completed using liquid acrylics. I wanted a few colourful paintings playing around in a watercolour style. I showed sketches of the others in previous blogs. Below are the final paintings.

I wanted to get a series and, although I have my favourite, I am pleased with the outcome of them all.

This is called Dancing the Blues Away 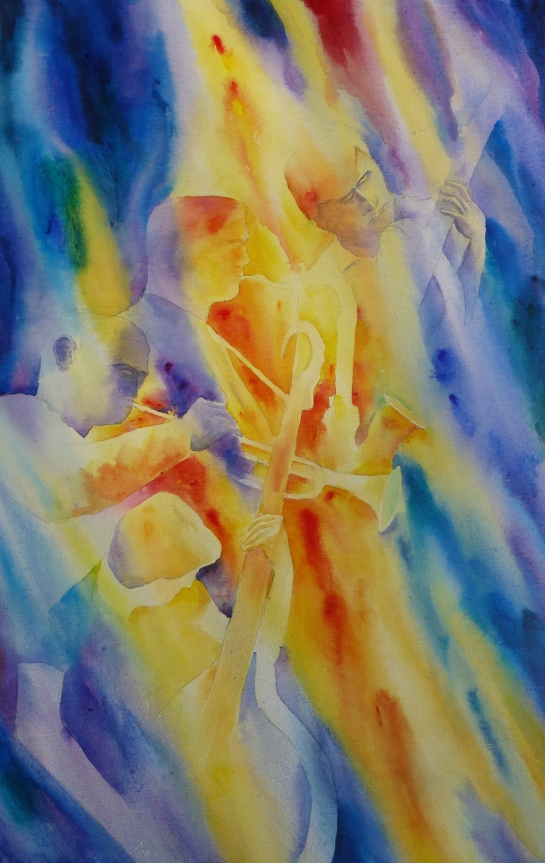 This is called The Rhythm of the Flow

I had a notion to paint some interlocking patterns of  colour using the human form as key . I wanted to balance on the edge of the figurative and abstract and let the interaction of colour be the main driver of the piece. I had some images of dancers and thought that this would be a good subject to use and then I thought of the title Dancing away the blues which then gave me direction for the hues and distribution of the colours.

I firstly did a watercolour sketch just to try out the colours and their distribution.

It also gave me an idea of the placement of the figures. I then had another go but this time with acrylic paint using both liquid and heavy bodied acrylics. I wanted to use acrylics to get the vibrancy of colour that they can give. I started with the liquid acrylics, washing them in and allowing them to mix like watercolours. I liked the effect and then I started to cut out forms with heavy bodied acrylics. This gave me the following sketch

I thought that the heavy bodied acrylics killed the dynamism of the liquid acrylics, so I had a second go but this time only used liquid acrylics, using subsequent washes to cut out the figures which resulted in the image at the top of the page.

Having only a limited number of liquid colours I did employ some heavy bodied colours but diluted them down and tried to get them mobile. I think it is coming along and I might get some more liquid acrylic colours to start a bigger version.

Other acrylic and watercolour paintings are on my website:  grahammcquadefineart.com