I wanted to try out some textures on this one with the sky, sea, rocks and pebbles all requiring different approaches. I would like to have added further detail and texture, such as building up the seaweed and pebbles, but was aware that I was getting too fussy. It was a good exercise and like so many paintings, you get to the end and realise that there were slicker and better ways of achieving your aims. So perhaps another go later.

For other seascape and beach paintings for sale, visit my website: grahammcquadefineart.com 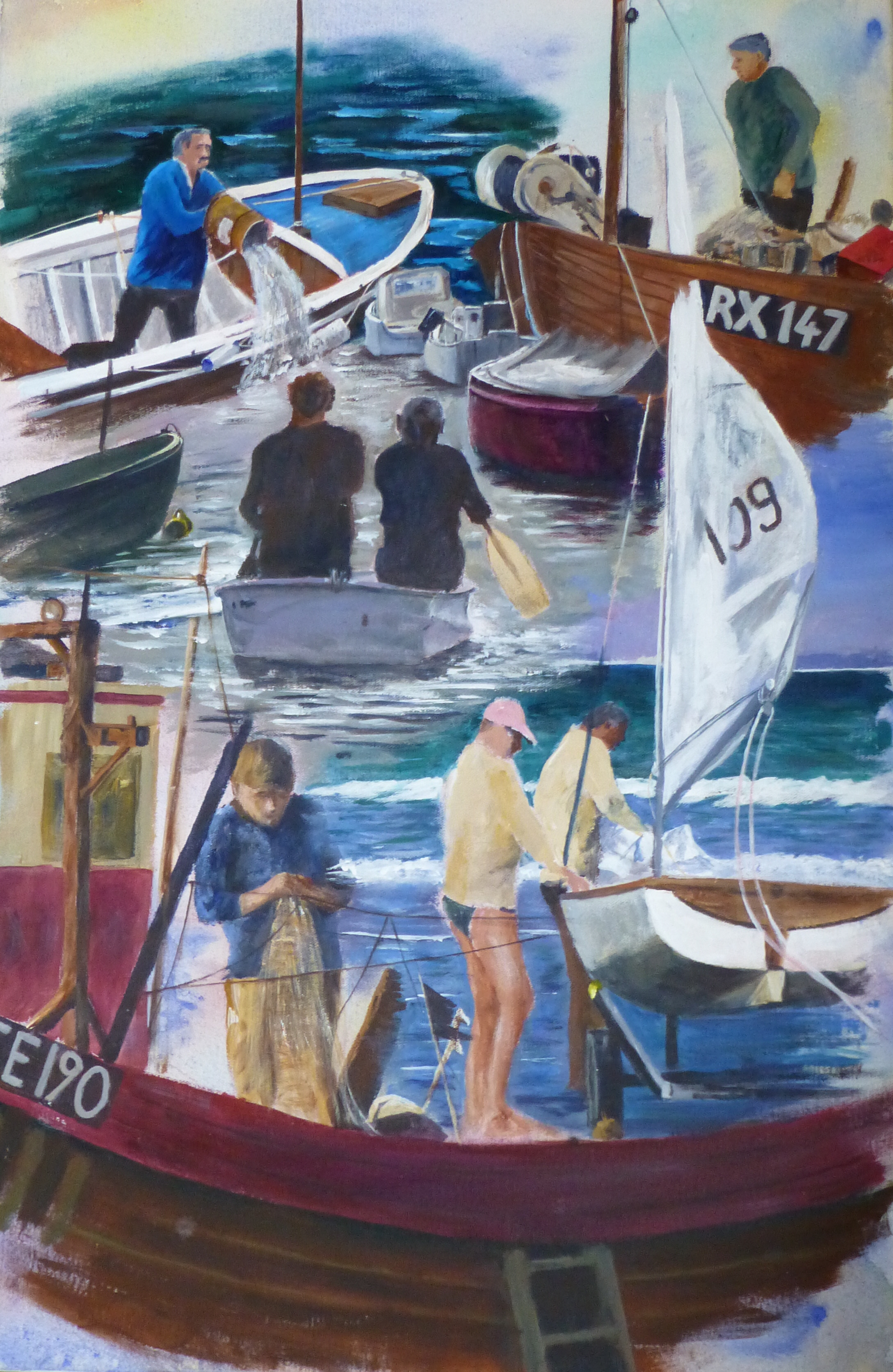 I was thinking about entering the marine artists exhibition in London. I had a couple of suitable paintings but wanted something a little different so that I could judge what it is that they are looking for a bit better and worked up this idea. Now that it’s complete I’m a little underwhelmed by it. I have got tighter than I would have liked. I’ll prop it against the wall and have a look at it over the next week or so  and make my mind up. I have used motifs that I have used as subjects before, in case you are wondering whether you’ve already seen it.

Other marine paintings are available for sale on my website: grahammcquadefineart.com 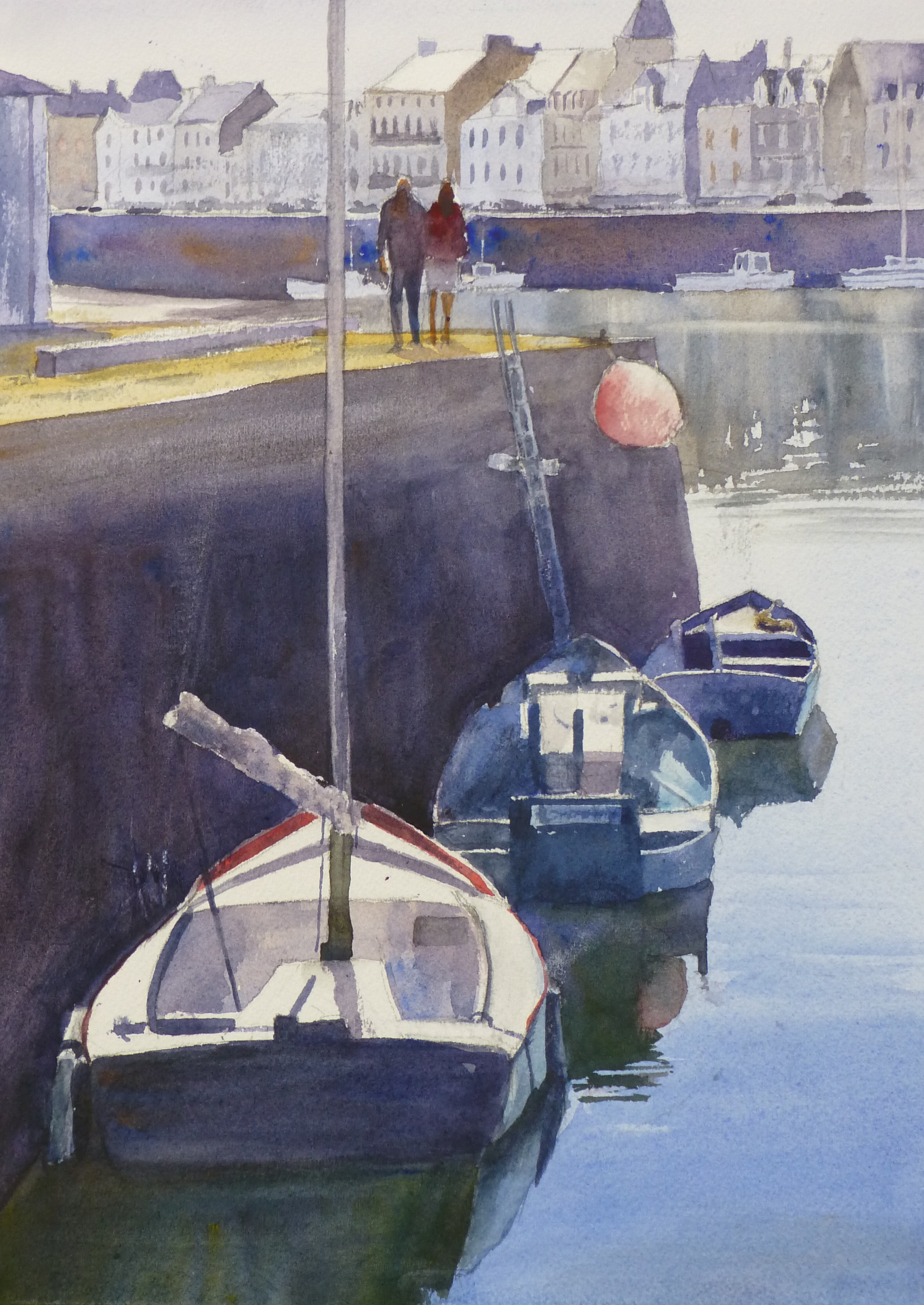 I was taken by the image of the three  sunlit boats against the shade of the harbour wall, but despite mixing colours on the paper the harbour wall has come out rather dead and there is a lot of it. Well, I thought that it was a good idea at the time.

Other marine paintings are available on my website: grahammcquadefineart.com

I had a number of photos of boats in the small harbour at La Val Andre in Brittany and wondered how they would look in an elongated format. I was taken by the two red boats (off different photos) against the grey green of the water.

Other nautical and beach paintings are available for sale on my website: grahammcquadefineart.com

I was caught by the orange hull against the blue of the water. I thought by bluing out the background it might further highten the effect of the light on the central boat. The painting is actually bluer than this image suggests. I also like the shot of red on the adjacent boat which brings in some dissonance to the basic complementary pairing and as such I haven’t echoed it anywhere else.

Other nautical based paintings for sale can be found on my website: grahammcquadefineart.com 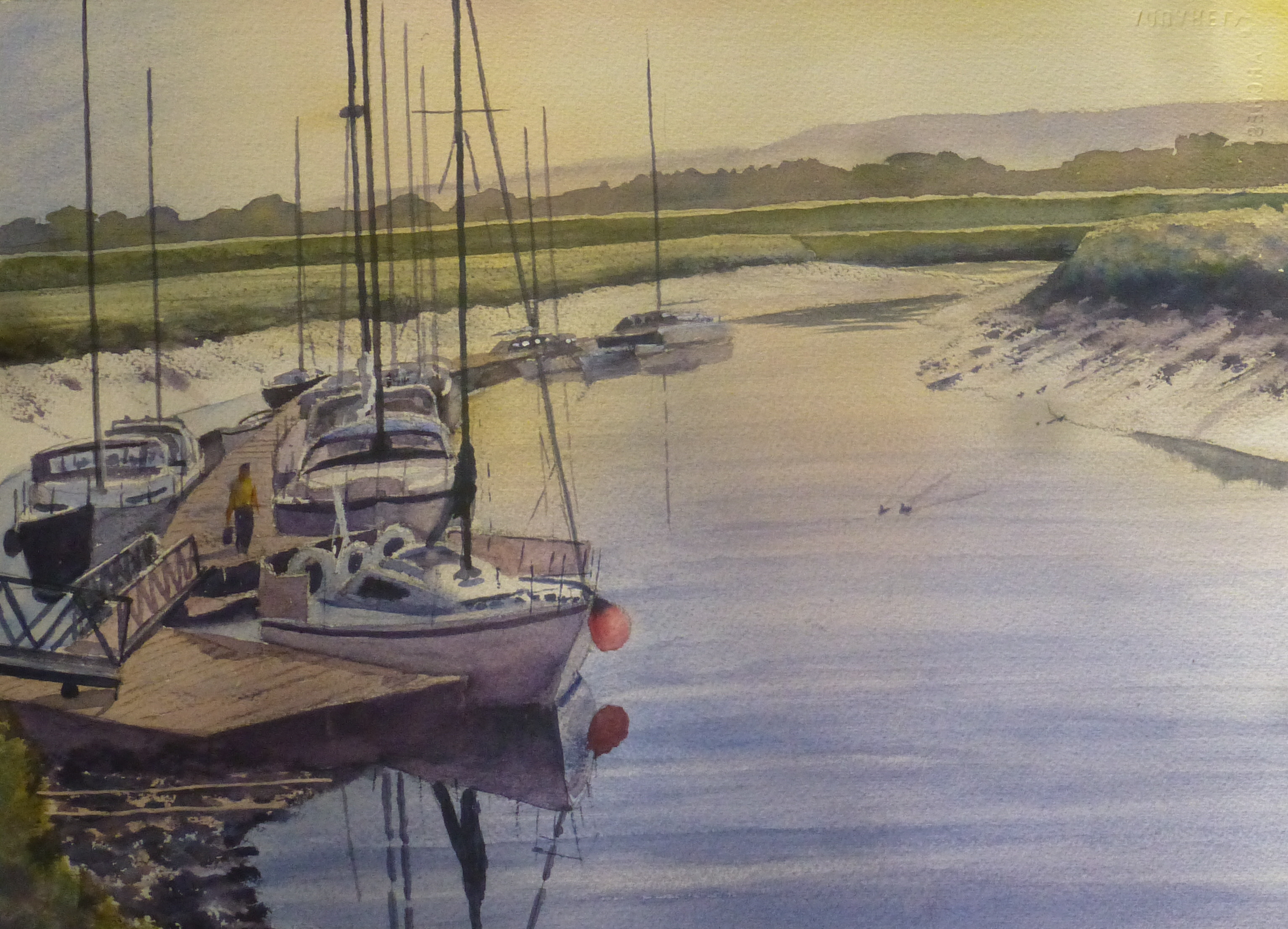 The area here, to the north of Southport,  is very flat and subjects can be hard to come by. Even so  I went out on my bike one morning and did some on site painting and took a number of photos. This painting  was from one of the photos. I need to get a collection of local paintings together for a couple of up-coming exhibitions, so all other projects have been put on hold.

Other local paintings are available on my website grahammcquadefineart.com 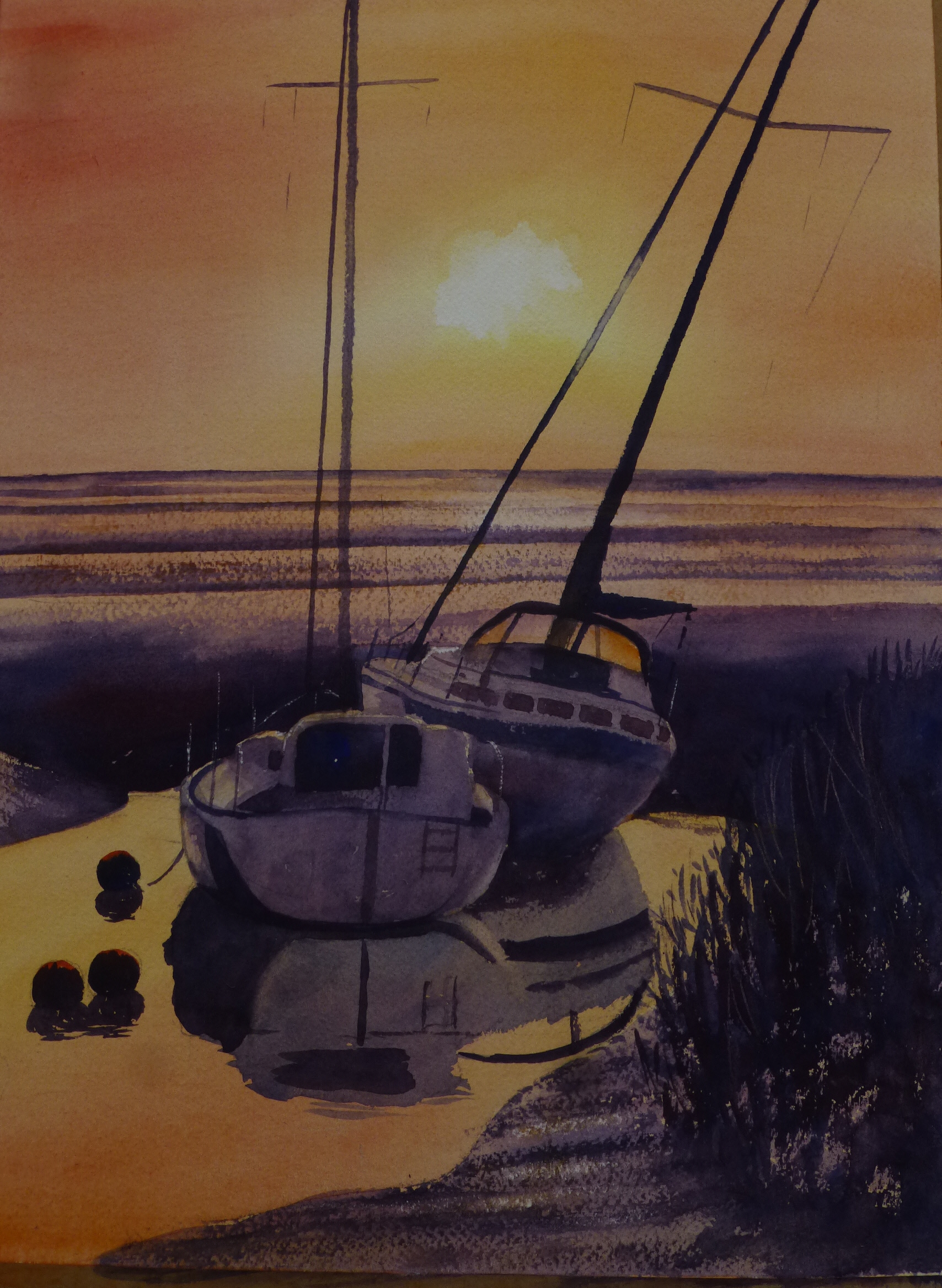 Last September I went out painting on one of the few bright evenings we had in late summer/autumn. I sat myself down near some old farm buildings surrounded by trees and started to draw and then paint. I hadn’t counted on the sun disappearing behind the trees so quickly ( very different to when I was out in June). The interesting assortment of buildings in light and shade quickly merged into a dark mass in deep shadow. So I packed up and,  as the sun was still hovering over the horizon, decided to call in to the Mersey estuary where the local river, the Alt, merges into it. There are a many boats moored right  along the estuary, all  the way out to the Mersey. When I got there the tide was out and  the sun cast everything in an orange glow. The river carves its way through the mudflats to the Mersey and the sun created intriguing patterns on the mud, reflecting off the wet mud and being absorbed by the drier areas. The scene was changing too fast to paint so I took a load of photos and painted it later on a half imperial sheet. I wasn’t happy with the result and had another go on a  smaller quarter imperial sheet. I am happier with this. There isn’t much to the scene and probably too many darks, but I think I’ve got the feeling of the place as the sun disappears over the Atlantic.

Other marine paintings are available  for sale on my website: grahammcquadefineart.com